Kelly’s Heroes co-founder Kerry McKean Kelly presented the check to Dr. Lei Zheng, co-director of the Precision Medicine Center for Excellence for Pancreatic Cancer at Johns Hopkins. Dr. Zheng is one of the nation’s leading physician-researchers in pancreatic cancer and, more importantly to Kelly’s Heroes, doctor of Steve Kelly, who inspired the creation of the nonprofit 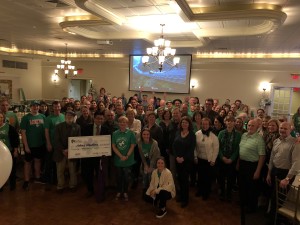 following his death of pancreatic cancer in April 2015.

Pancreatic cancer is the third leading cause of cancer death, with a five-year survival rate of just 9 percent. Patients often hope for a miracle against the deadly cancer, but Dr. Zheng recalled that Steve Kelly “found the miracle” in living life to the fullest during his 22 months living with pancreatic cancer.

Kelly’s Heroes also was honored to host pancreatic cancer patient Arnold Simon at its St. Patrick’s Day celebration. Simon, of Baltimore, said he’s feeling great two years after his pancreatic cancer diagnosis. His experimental treatment regimen is a variation of the combination of drugs that Steve Kelly had received in one of two clinical trials he volunteered for. Simon credited Kelly for paving the way for improved outcomes for others facing pancreatic cancer.

The annual St. Patrick’s Day party featured a performance from the Denogla Ardmore School of Dance, as well as an array of raffle baskets from generous businesses.